The metastasized lymph node (top) of a mouse injected with the probe shows lower fluorescence signal intensity than a normal lymph node (bottom).

In order to determine the best treatment for patients affected by cancer, it is crucial for physicians to identify how the disease is spreading via lymph nodes in the body — a process known as metastasis. Progression of the disease is currently monitored by dissecting lymph nodes during surgery and subsequently performing biopsies. However, using a more sensitive and accurate method that is less invasive based on optical imaging technologies to visualize disease progression in situ could further improve cancer patient diagnoses and limit the time that they are required to spend in surgery.

Now, Young-Tae Chang and co-workers at the A*STAR Singapore Bioimaging Consortium, together with Jung Sun Yoo and researchers at the National University of Singapore, have developed a novel fluorescent probe that is capable of infiltrating lymph nodes and highlighting cancer progression1. The probe could potentially be used to provide information for making rapid diagnoses during surgery.

“Immune cells in lymph nodes, such as macrophages, have a novel role in disease progression,” explains Yoo. “We wanted to find a macrophage-targeting fluorescent probe that could distinguish metastasized lymph nodes from inflamed or normal lymph nodes.”

The team sifted through many libraries of fluorochromes — small nontoxic organic molecules suitable for intraoperative imaging — while searching for those that could specifically stain macrophages. Flow cytometry and testing with human blood samples allowed the researchers to select the best fit for their fluorescent probe.

“We then used the probe for in vivo mouse imaging,” explains Yoo. “This tested whether the probe could pinpoint the sentinel lymph node — the first node to drain a tumor and potentially initiate cancer spreading through the body.” Following injection, the team’s probe immediately accumulated in the sentinel lymph node of the mouse, with bright signals in inflamed nodes and less bright signals in metastasized nodes (see image).

The new probe has several potential biomedical applications. Researchers could use it to investigate the behavior of macrophages in lymph nodes in vivo. Surgeons could obtain real-time information on the infiltration of tumors and how far the disease has spread while a patient is still in surgery, eliminating the need for pre-operative biopsies and minimizing the potential for further surgical procedures.

“We also hope to develop macrophage probes with near-infrared for better depth penetration, as well as subset-specific agents capable of differentiating between ‘good’ and ‘bad’ macrophages in many different diseases,” states Yoo. “Subtype-specific fluorochromes will have a high impact on the future of clinical imaging.”

We received a GRF research grant from RGC! 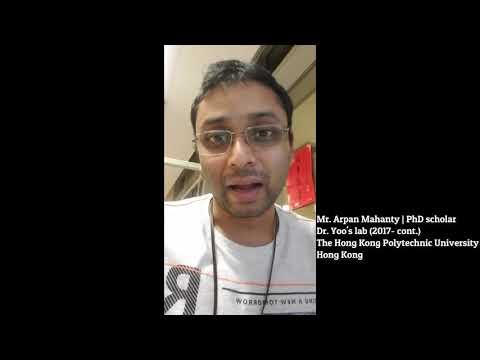 Time to say goodbye to Inyoung

Minfeng published a review paper in the journal, Cancers

Several positions are available for PhD candidate, research assistant/associate, and undergraduate i

Dinner in the Korean Restaurant

Alex received the oral presentation award in the ISNBB 2018